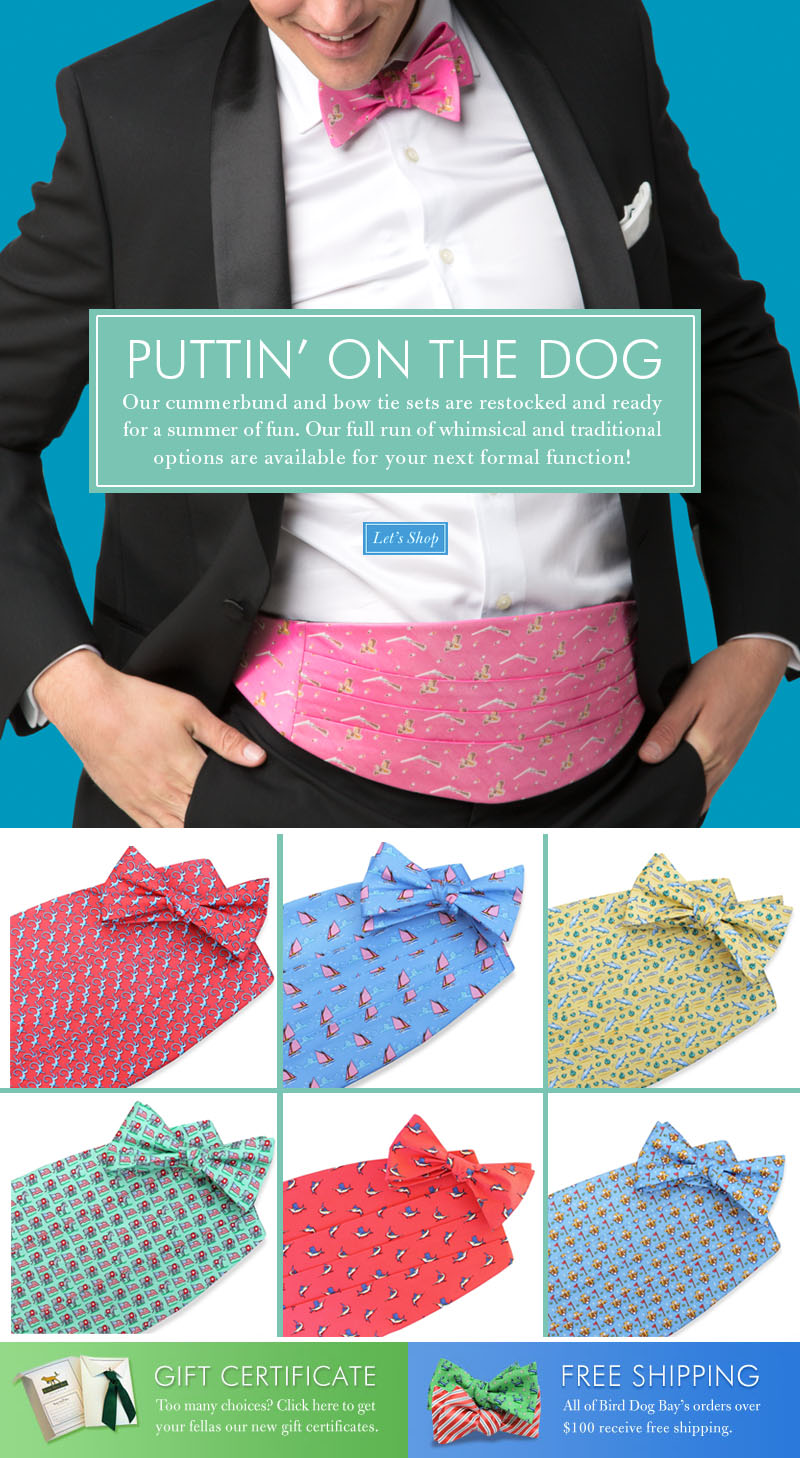 Our silk cummerbund sets are back in stock and available for your next formal event this summer. Featuring a handful of new designs alongside some fan favorites, we guarantee you’ll pick a winner from our wide and varied collection. With both whimsical and traditional options available, we have the perfect match for your upcoming wedding or black tie ball.

Additionally, if outfitting your groomsmen or purchasing for a group, we’re happy to offer a group discount–just let us know! 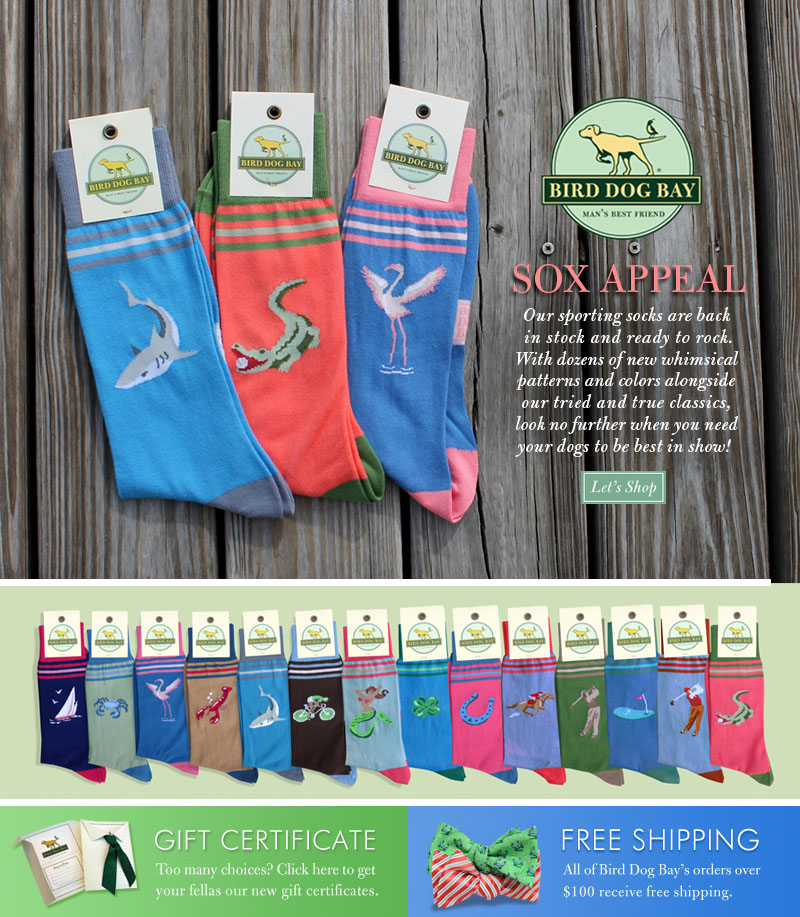 Spring for Some Socks!

Hot off the loom is our latest collection of men’s mid-calf dress socks! Steve has taken some of our best selling neckwear designs and incorporated them into our latest release of socks, perfect for the gentleman unafraid to stand out. New to this collection are select patterns and colors which perfectly complement some of our fan favorites. Constructed with Pima cotton and featuring a touch of nylon and and spandex for a touch of stretch, our mid-calf dress socks are sure to be your new favorites this year. 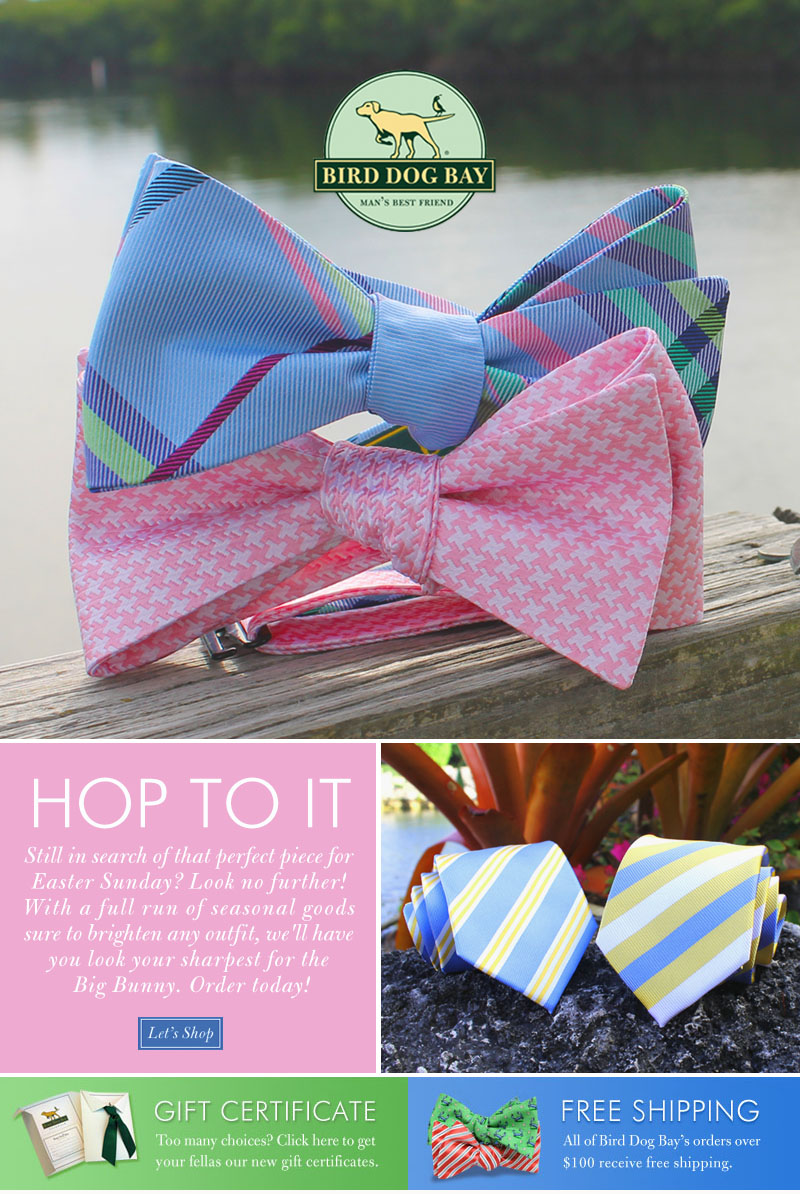 Dressed In Your Sunday Best

Worried you’ve left it late? Worry no more! Here at Bird Dog Bay, we have that perfect piece of sophisticated whimsy or traditional take to make you look your best this Easter Sunday. Whether hunting for eggs or cutting the ham, knot up on of our made in America ties or slip on one of our Italian-milled dress shirts for that perfect seasonal look–we guarantee you’ll attract more than a few cute chicks! 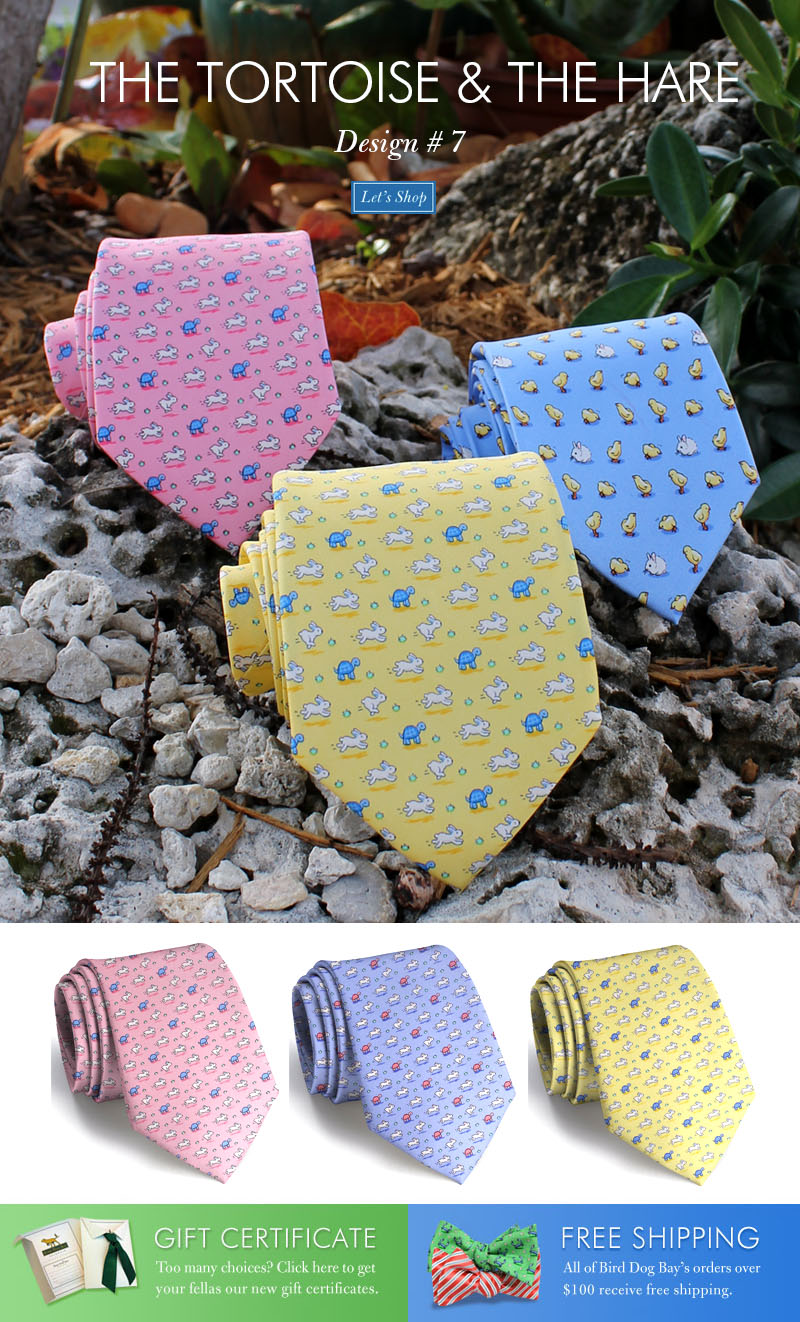 2016 is a milestone year for Bird Dog Bay. After thousands of miles traveled, hundreds of silk designs and products, and a commitment to doing what we love, we’re proud to have recently celebrated our tenth year in business!

In these hundreds of designs, all illustrated by Steve, we’re happy to offer something new each and every season. No matter your interest or preference, we like to think we have just the product for you, and while we’re proud to constantly grow and evolve, sometimes there’s no need to reinvent the wheel. In this case, enter this week’s featured design, “Tortoise & The Hare.”

“Tortoise & The Hare” was one of the first designs crafted by Steve for our inaugural collection in 2006. Inspired by the classic Aesop’s Fable, Steve put pencil to paper and came up with a gorgeous repeat that has stood the test of time. Introduced at first as a fun, whimsical tie for the spring, “Tortoise & The Hare” soon became a fan favorite. As Steve worked to assemble this season’s collection, he returned to this ever popular choice and thought it would be a terrific tie for Easter: a crafty number perfect for the season that will look even better knotted up this Sunday.

As we learn in the fable, slow and steady wins the race. Enter “Tortoise & The Hare,” a tie we’re sure will be with you year after year through your journey in life. Thanks for a great ride thus far, and here’s to another ten years! 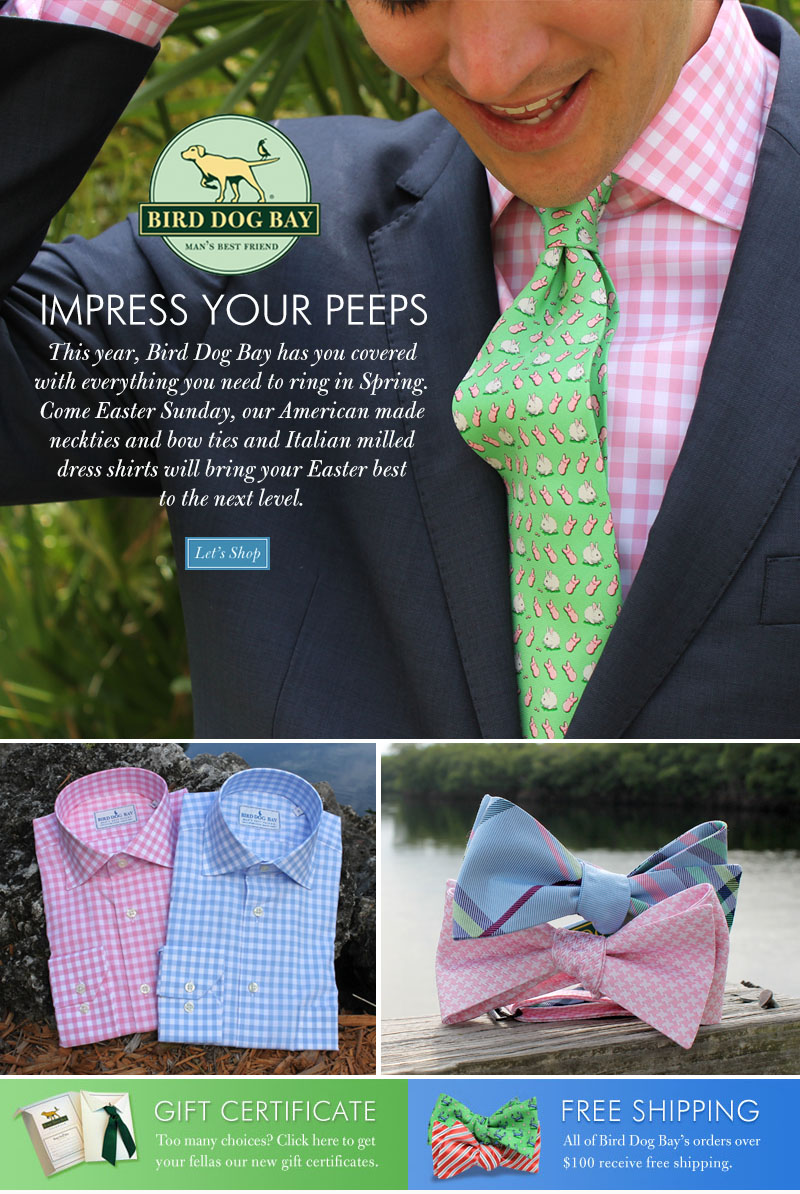 When the big rabbit makes his rounds on Easter Sunday, make sure you look your best in our latest goods! With neckties and bow ties galore available, you can opt for a whimsical and wild pattern or one that is tame and traditional. Alongside our neckwear, we have a wealth of dress shirts, socks, and boxers, and other accessories to make you fit in with the spirit of the season. 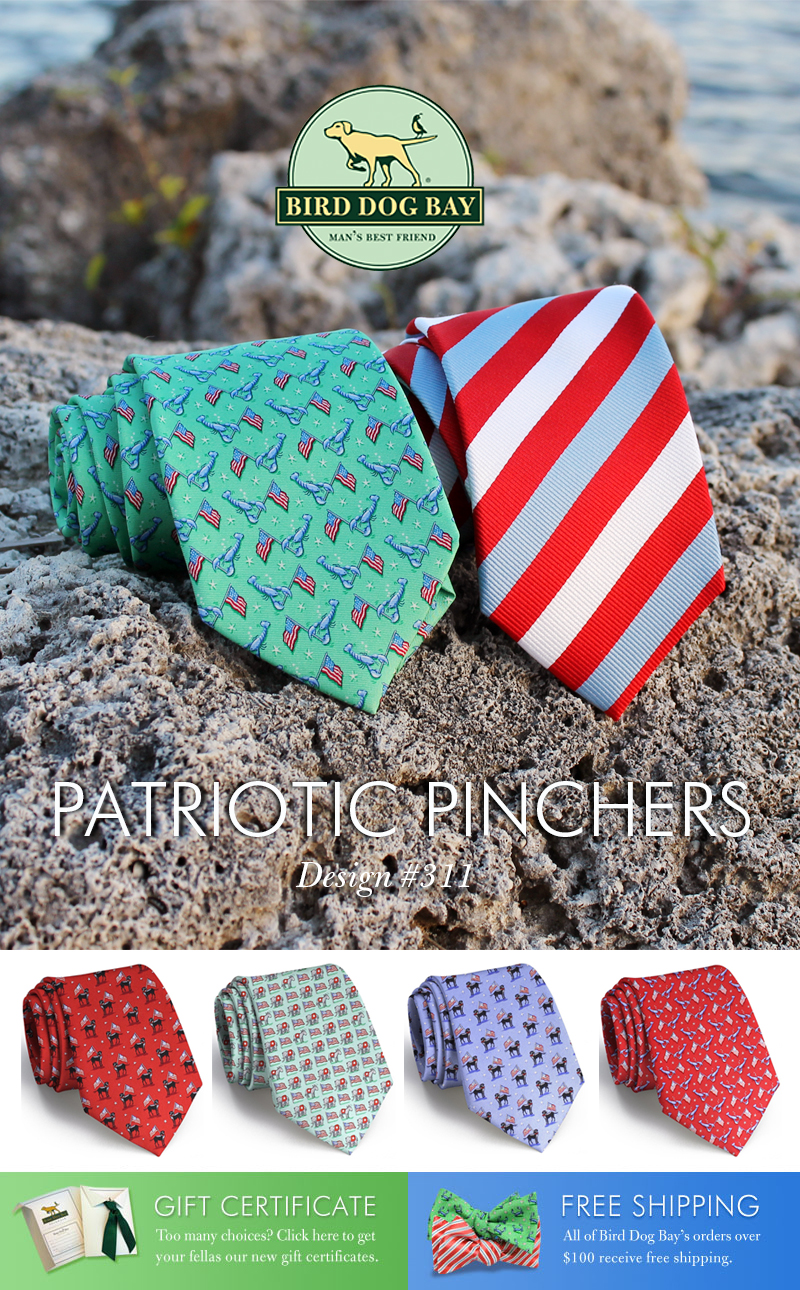 It’s mid-March and we find ourselves in the midst of primary season for the 2016 election. With hotly contested races across the nation, some are “feeling the Bern” while others are “stumping for Trump.” In many ways, the nation is divided as we look to November, with the Democratic Party and Republican Party gearing up for a fierce race in the fall.

Here at Bird Dog Bay, however, we’re mostly focused on parties–or at least dressing for them. The two designs above are brand new for this season, and they’re both great options for someone with political interests no matter where they lie.

When illustrating this new collection in Vail, CO last summer, Steve hoped to incorporate silk patterns for folks with different preferences. These preferences, however, are less political and more about those who favor that sophisticated touch of whimsy for which we’re known versus those who are more conservative. For as many whimsical silks as we sell, we also sell a number of traditionals and neats, though the divide is less sharp than you’d think.

Our “Patriotic Pinchers” tie is a prime example of the former. After drawing “Dogs Love America” a few seasons back before upping the ante this spring with “American Labs,” Steve always likes to include a bit of Americana especially as we approach July. “Stafford Stripe” entered the collection as a unique take on the classic repp tie. It’s crafted with a nice balance to wear perfectly with your favorite blazer or suit, not to mention is appropriate anywhere from the boardroom to the club.

At any rate, rest assured no matter your allegiance or preference, we’ll have you knotted up and looking your best each and every season. 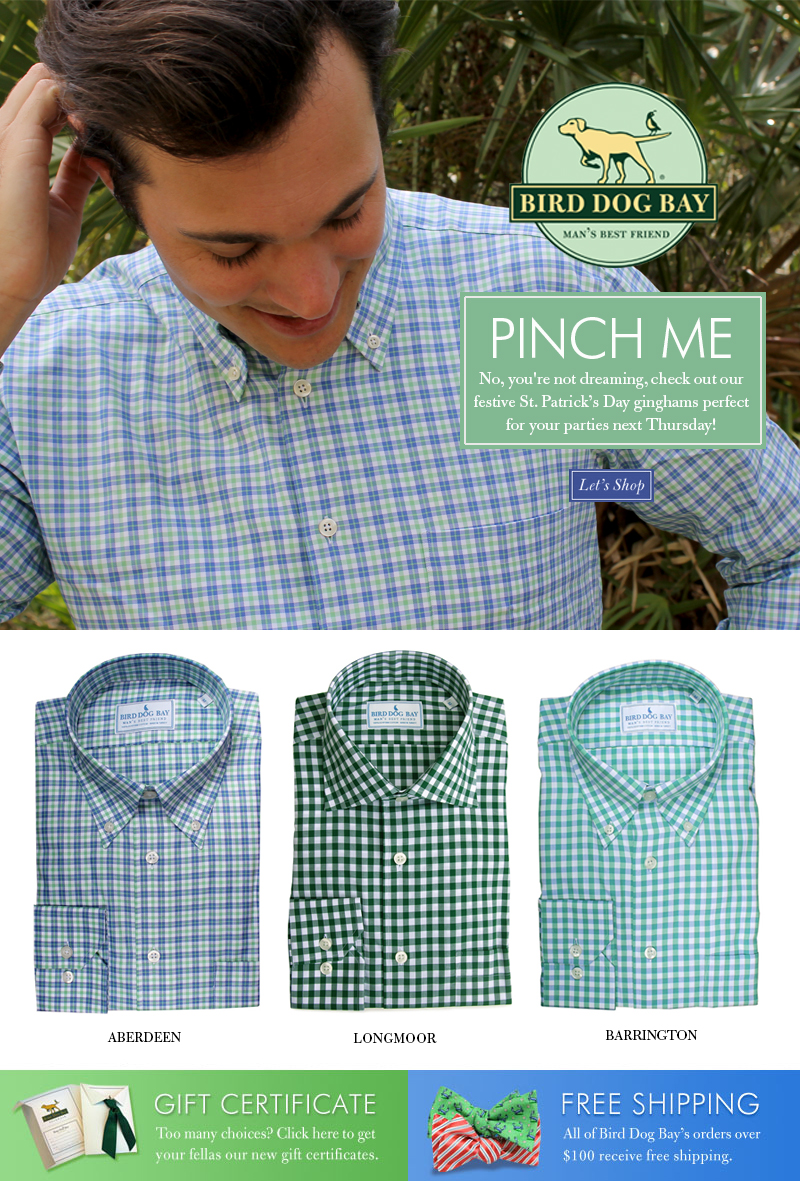 All Others Will Be Green with Envy

Whether whipping up a feast of corned beef and cabbage or sharing a pint with friends, Bird Dog Bay will make sure you look your Irish best. Celebrate St. Paddy’s Day with one of our new Italian-milled dress shirts or handmade in America neckties or bow ties. We’re sure to have the perfect addition to your festivities no matter the occasion. Sláinte! 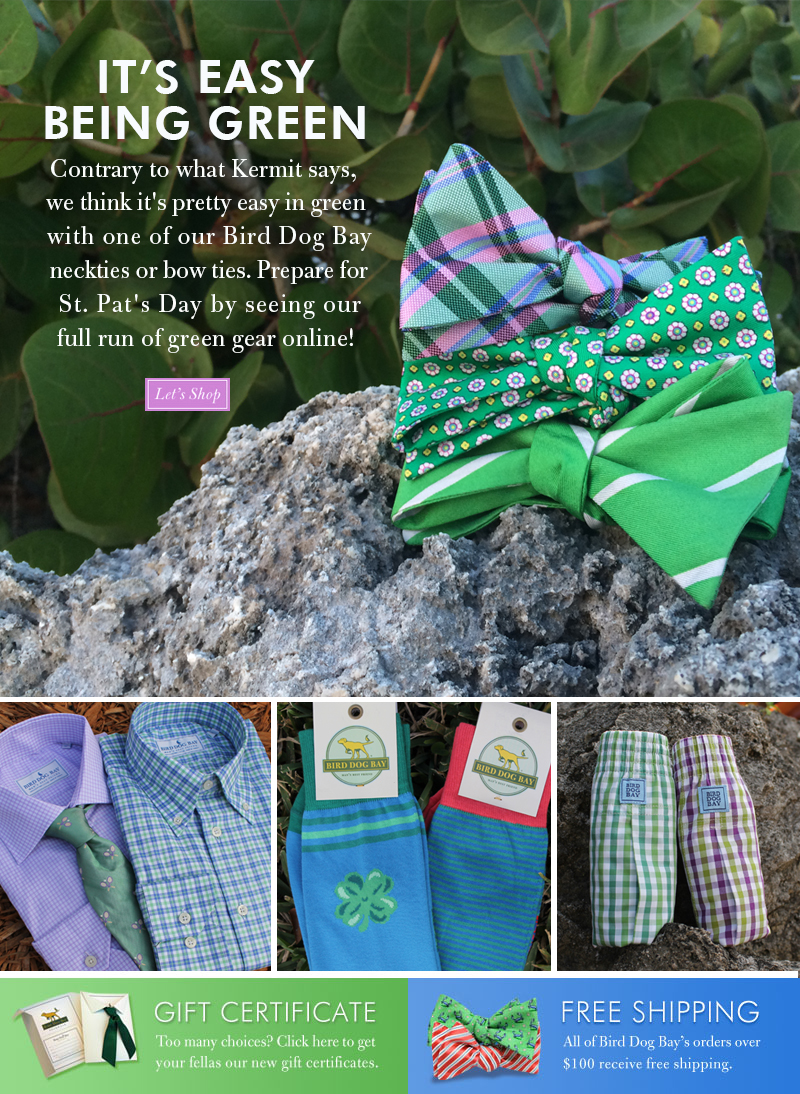 On Thursday, March 17, folks all across the United States will celebrate St. Patrick’s Day. While some will undoubtedly play hooky from the office to enjoy a pint or two, we realize that not everyone can get away for a drink at 2:30 PM. For those whose festivities are delayed until Happy Hour, you can show your affinity and get a little lucky with one of our great neckties or bow ties! From “Horseshoe Heaven” to one of our more traditional options, we’re sure to have you look your best.