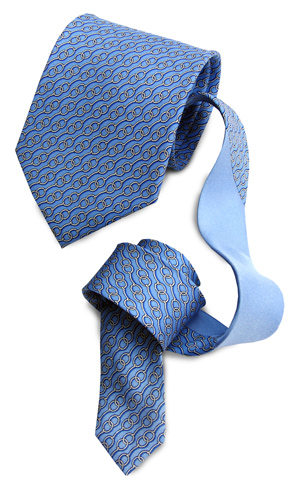 The international hit, Slumdog Millionaire inspired, well…millions. This included our designer, Steve, though not in your typical fashion. (bad pun intended)

He happened to catch an episode of Regis & Kelly where Anil Kappor, the actor who pretty much plays the role of Regis’s Who Wants To Be A Millionaire host in the hit film, was that day’s guest. Steve had been mulling over how to cater his quickly growing design collection to Big & Tall folks for a couple years and in one instant solved the weighty problem.

Steve has been a necktie designer for a long time and was surprised as everyone else in our business the power that Regis’s donning a solid tie while hosting his show had in our industry. At one point the solid tie trend became so popular that particular year Regis self-labeled his own collection. You can connect the rest of the dots by looking at the photo on the right. Between having a local necktie seamstress, ordering bolts of our ground colors in solids, some clever reconstruction tricks and about seven days we can build you any of our tie designs into extra-longs. Easy breezy. Thanks for the inspiration, Reg…

All of our extra-longs are 64” in length, though if you need them longer write your special length in the gift note box at check out, or call us at 312.631.3108 after you’ve placed the order. Seeing as we’ll be custom building the tie just for you, we can make them any length you wish; and they take a few days to hand-make, so hold tight.